A Message from Our PP 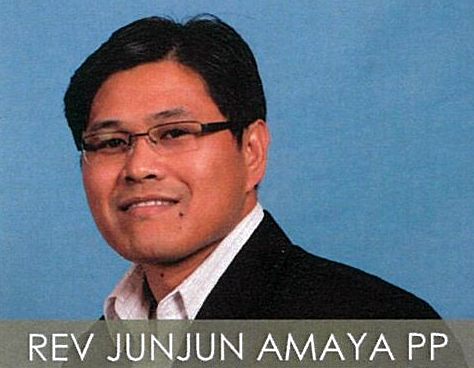 I was born on the 28th of December of 1980 in Barrio Catolohan Dalaguete. I am the 6th in the family of eleven, yet the eldest son of Mr Pantaleon Amaya Sr (+) and Mrs Iluminada Cariego. I have 7 sisters and three younger brothers. Since childhood (perhaps on the third grade) I always believed I wanted to become a priest. Everytime I saw a priest wearing a white vestment and/or blessing the people with the Blessed Sacrament on the monstrance, something deeper in me would fire me up and made me long to become like him- the priest. However, being the eldest son of a big family almost always hindered me to pursue my dream of becoming a priest. It was so because I believed then that I have to be supportive of my family more than others.

In 1996, my father fell ill. I had to stop my studies ( I was on my Second year in High School then) and assisted my family in the way I can. At the same time, I worked as a Catechist in the School in Catolohan. Fr Joy Danao was the parist priest then. I have to be honest that just by his ways of presenting himself to us as he celebrates the mass, I felt so much encouraged and inspired to become a priest like him. His presence as a priest affirmed my vocation so much.

Eventually my father died. Even then, I still desired to become a priest, but the circumstances now seemed to blur things out. I had to work (errand boy in the city), then as a ‘checker’ in one hardware store in the city, so as to help my family.

Another thing that almost made me give up was the fact that the College seminary would only accept High School graduates. I only finished up to Second year in High School. I had few months studying for my third year but as I said I had to stop due to my father’s failing health. Anyhow, I went on working, and hoping against hope that an opportunity would be open to me to get into the seminary.

God heard it. He offered an opportunity for me and that was a transforming experience for me and my faith. It happened like this. The department of Education offered a Placement exam for the out-of-school youth, and granting acceleration to a higher studies if lucky enough. I grabbed the opportunity then. I quit from my work as a ‘checker’ to prepare myself for the test by doing ‘self-review.’ August 20,1998, the first anniversary of my Father’s death, I took the test. I have to admit I struck a bargain with God. I said to him: Lord, if you let me pass this test, I would really enter the seminary.’ He never let me down. I passed and was accelerated to study as a first year student in College. I can’t believe it myself. I skipped through two years of High School. That was one of the happiest days in my life.

Father Danilo Blasabas (+) helped me a lot in my pre-seminary preparation. I couldn’t forget the day when he went to the place where I worked to see me. I was cleaning the gutter then, when one of the ladies in the place told me that a priest has come to see me. I went out and saw Fr Danny. He said to me that he has just been to the Diocesan seminary and inquired if they would accept someone who hasn’t finished formal high school studies. He told me the seminary would take me but I would be under experimentation and observation if I can really cope up with the seminary formation. I went home and stayed in the parish with Fr Danny. He involved me in a lot of things in the parish. He allowed me to go with him to the different barrio chapels. We had plenty of deep talks about life as a priest based on his experience which really made me fall in love to being a priest all the more.

All at the same time, my family has been supporting me of my dream, though not all of them showed their all-out support considering that I am the eldest of my family and I could have been a great help for my sisters and brothers if I would study something else but becoming a priest. Anyhow, God has his way and here I become, a priest.

It was never a smooth seminary formation. I’ve struggled a lot, doubts at times, cried, failed in some respects, etc. I am human. The amazing thing is that God never lets me down. He knows I am struggling financially since I only come from a small-scale farming family with no stable and reliable income. God has assigned people to help me in my studies financially. The Parishioners of San Isidro Labrador in Mantalongon through the Parish Pastoral Council have helped me a lot and I am very thankful to God and to you all for that. The other extraordinary thing is that somebody paid for my seven years of study in the Diocesan Seminaries in Cebu, without even identifying or introducing her/himself to me until now. God bless him or her wherever she/he may be, whatever, he/she is doing right now.

Due to the need of priests in Australia, I was persuaded to come over here and finished my studies in the Regional Seminary in Melbourne. I studied for another four years, that made my formation to the priesthood into 11 years in total. The wisdom of the Bishop Joe Grech (+) of inviting us to study here is for us to immerse into the Australian culture gradually and understand it reasonably, to make friends here, to understand the immense distances between parishes and the scarcity of priests.

I am grateful indeed to Bishop Joe for his fatherly care for us. Before he died, I was the last one he ordained a deacon on the 6th October 2010. September 28, 2011, (Feast of San Lorenzo Ruiz) I was the first one to be ordained priest in my own home parish  (San Isidro Labrador- Mantalongon, Dalaguete Cebu) by Bishop Julito Cortes.

For all that you are, whoever, wherever and whatever you are doing now, for all that you’ve done to  support me- thank you so much.

My Ordination is just another chapter of the story of my vocation and everyday in my life now, wherever I am,  is another page on my personal journey with Jesus…as his priest…

Lord Jesus thank you so much for the gift of the priesthood.